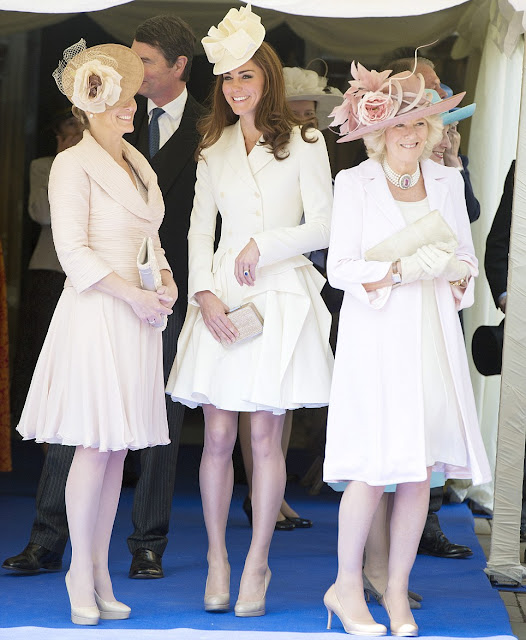 Okay friends, can we just say that this white McQueen coat dress is one of our favourite pieces that Catherine has worn, ever? Look! We love it so much it has even inspired us to address her as requested! Anyhoo, we love it. Love. It. We hearted the sculpted coat dress when Kate wore it to the Trooping the Colour ceremony last year, and we love it now that she's paired it with a Reiss dress (the Peacock, last seen at the Epsom derby) and a pretty white Jane Corbett hat. And look how happy the Merry Wives of Windsor look, all laughing and matchy and wearing nude platform pumps (Kate's are by LK Bennett, natch). Kate's earrings are by Kiki McDonough and her clutch is also LK Bennett.


Do you love Kate's McQueen as much as we do?

Photo via The Daily Mail
Posted by All About Kate at 10:11 PM 1 comment:

Duchess of Cambridge Wears Erdem to Trooping of the Colour 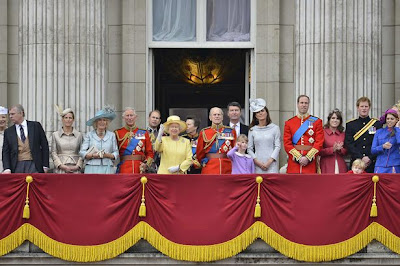 Senior members of the British royal family (including on-the-mend Prince Philip) gathered in London today for Trooping of the Colour, the celebration of the Queen's official birthday. For the event the Duchess of Cambridge once again chose British-based Canadian designer Erdem. 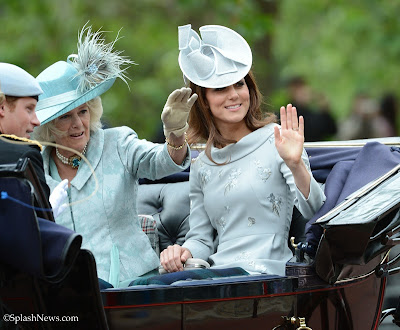 Kate's light grey shift dress featured three-quarter sleeves and tone-on-tone floral embroidery. We want to like this look, we really do, but something about it just isn't working for us. We did quite enjoy the Jane Corbett hat. Earrings are the Links of London Effervescence Bubble Stiletto earrings. From what we can see Kate's bag is a neutral suede box clutch and we've yet to see a shot of her kicks.

What do you think of Kate's Trooping the Colour outfit?

Photos via Mirror.co.uk and SplashNews.com 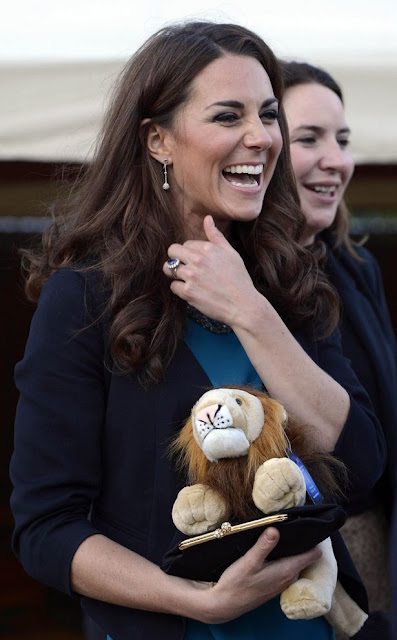 While Prince William was watching the England-Sweden Euro match on the telly, Kate Middleton was attending a performance of The Lion, The Witch and the Wardrobe, put on by children from The Art Room, a charity of which the Duchess is now a patron. For the occasion Kate stepped out (she literally walked to the event in Kensington Gardens) in a blue dress from Zara and the Helena blazer from Whistles. 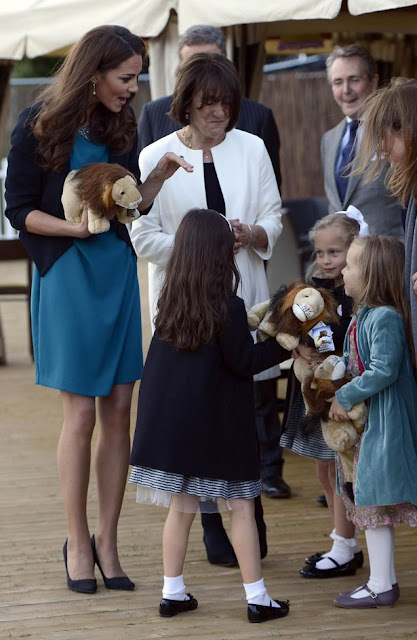 Photos via Mirror.co.uk
Posted by All About Kate at 11:43 PM No comments: 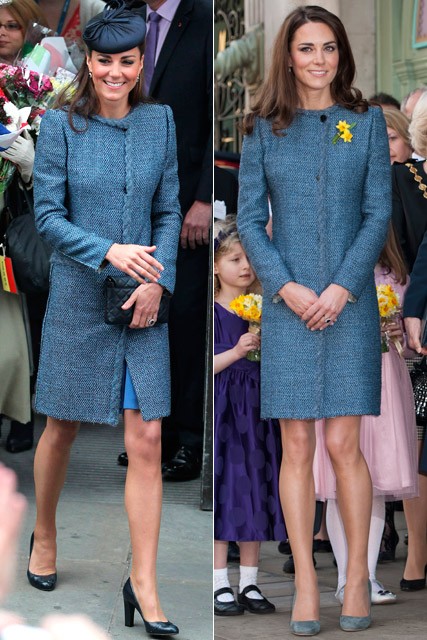 For a trip to Nottingham with Prince William and the Queen, the Duchess of Cambridge selected the same blue boucle M by Missoni coat as she wore on an earlier outing with HM and Camilla. Kate swapped out her grey suede Rupert Sanderson Malone pumps for her L.K. Bennett "Art" pump, we prefer the former. For the Nottingham visit Kate also wore her re-fashioned sapphire and diamond "Diana" earrings, the quilted Jaeger "Kate" bag, and the Rachel Trevor-Morgran chapeau that she wore with that fabu McQueen coat dress last year. Underneath the Missoni? That blue Zara dress. What do you think of Kate's recycled look?

Photo via Marie Claire UK
Posted by All About Kate at 11:11 PM No comments: 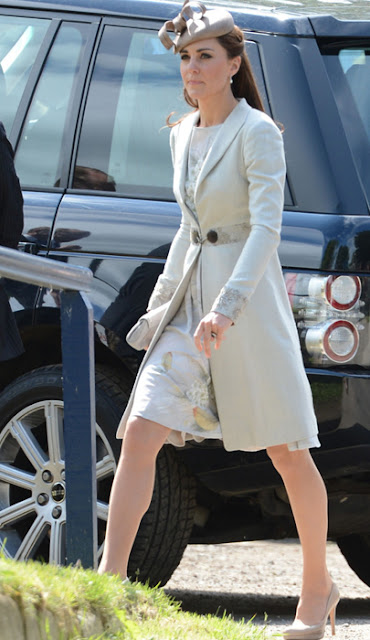 The Duke and Duchess of Cambridge attended the wedding of his cousin Emily McCorquodale, the daughter of Princess Diana's sister, to James Hutt. As usual Kate tried her best not to outshine the bride by selecting pieces from her wardrobe that have already be worn. 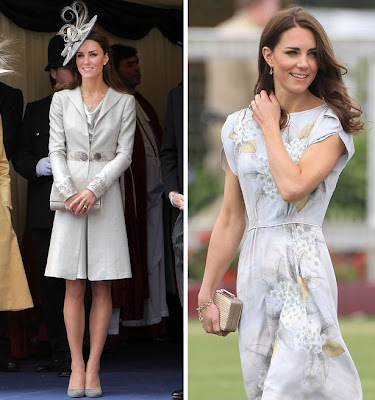 In this case Kate wore the Jenny Packham dress last seen at the polo match in L.A. underneath the light grey Katherine Hooker 'Buxton' coat she sported for the Order of the Garter ceremony last June. For the wedding K-Midd accessorized with the Whiteley hat seen at the Epsom Derby, her faux pearl drop earrings (confirmed as Heavenly Necklaces by Grazia), and the Hobbs' Somerton clutch, which was first spotted during the Canada tour. Kate was also wearing her L.K. Bennett nude pumps. 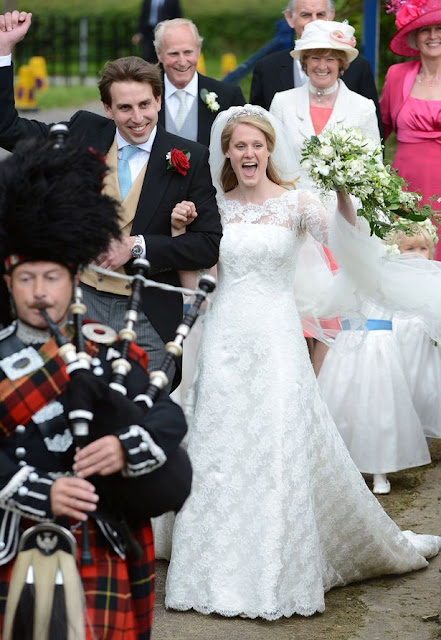 What do you think of Kate's recycled wedding look? Yes, the dress is a little longer than the coat but, overall, we think this was a pretty good eye at pairing together pieces that have all been worn separately and never together. Good job Katie!

Photos via The Daily Mail
Posted by All About Kate at 8:55 AM 1 comment:

So, in case you were wondering, Kate Middleton kinda loves Alexander McQueen. Like, Kate and McQueen are sitting in a tree k-i-s-s--well, you know the rest. The Duchess of Cambridge started out this weekend's Jubilee celebrations wearing pleated red McQueen and would go on to sport two other McQueen pieces in the days that followed.


At Jubilee services Kate looked prim and chic in a body skimming, lace-covered, nude toned McQueen sheath dress. We like lace, so we say...pretty. The sash (which matched Kate's oft used pink Prada clutch) was a little bridesmaid-y, but we're over it. Mostly. Kate's hat looked like a cross between a flower and butterfly wings and was made by Jane Taylor Millinery. There was netting and sparkle (we could never slag on sparkle) and also what looked like pearls to match Kate's pearl earrings. 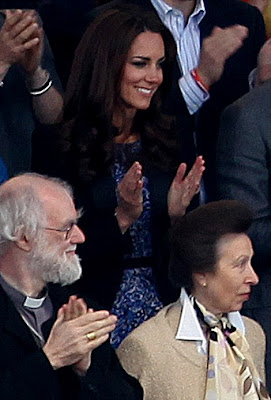 Kate paired the McQueen piece with Whistles' Multi Petal Print Dress, which she belted. Pictures of the event are pretty sketchy, but you get the gist of it. What did you think of Kate's Jubilee looks?

Photos via The Daily Mail and Polyvore
Posted by All About Kate at 11:29 PM No comments: 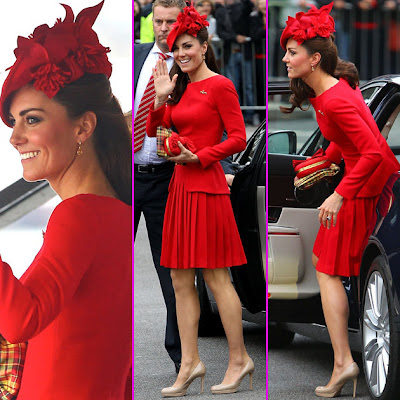 Hey you guys, there's a new Kate sighting to report! The Duchess of Cambridge was seen today at Diamond Jubilee festivities for the Queen alongside William and Harry (in uniform and looking quite dapper!) Now to the dress: bright red, pleats, McQueen. We likey. Yes, it's a little shades of pale-pink-Emilia-Wickstead, and maybe a little safe, but it's also ladylike, pleats are flattering on Catherine, and it's vibrant without threatening to overshadow the Queen (who is quite ravishing in white and silver Angela Kelly). So all in all? A win in our books. 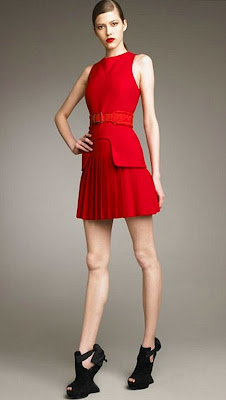 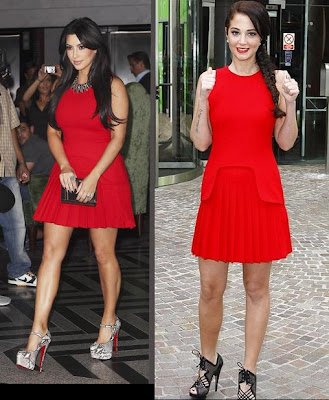 The original McQueen--previously worn by...Kim Kardashian and Tulisa?--is shorter, sleeveless and belted. While Kate's version is much more covered up it's also more appropriate for the riverboat pageant. 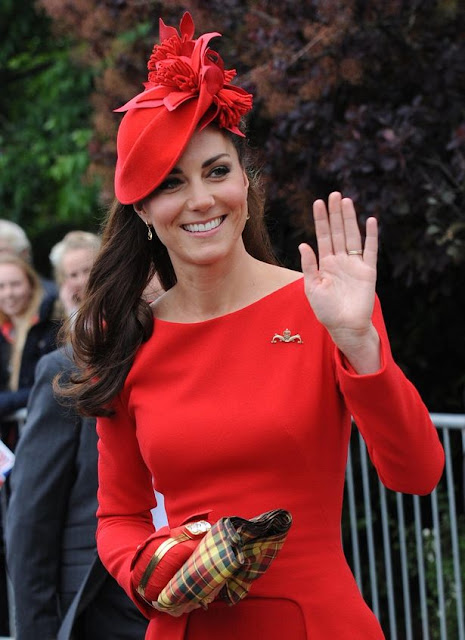 Kate's hat is being reported as Sylvia Fletcher for Lock + Co and she's also sporting her go-to nude pumps and Kiki Mcdonough earrings. Kate's other accessories include a brooch featuring two dolphins (apparently a gift from the Royal Navy Submarine Service) and a scarf in the new Strathearn tartan (the Cambridges' title in Scotland.) 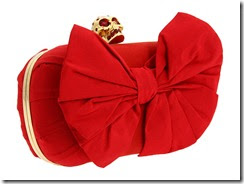 Kate's bow box clutch is similar to the McQueen above, although sans skull clasp. We're kinda disappointed by that, honestly. Skulls are pretty awesome. 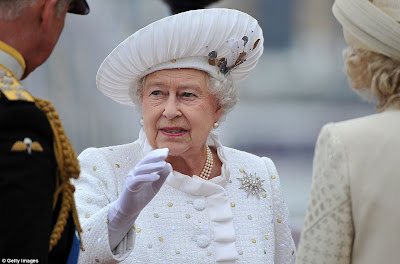 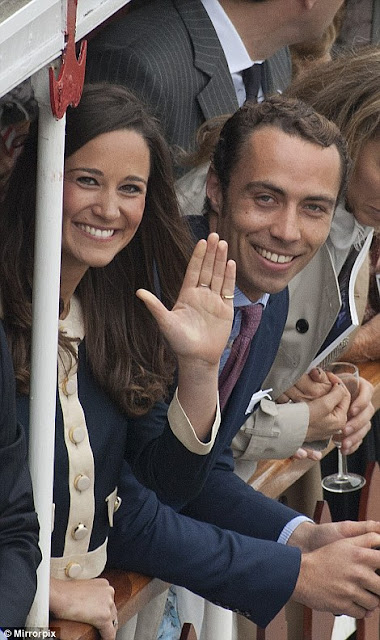 Oh gawd, the Middletons are in the house.
Pippa and James -- le sigh.

What do you think of Kate's McQueen?