Wills and Kate are in Yellowknife today.
The Prince participated in a street hockey game and from the result
its obvious that a puck and stick isn't Wills' strong suit.
We're liking the Cambridge jerseys -- poor
Will, he seems to always be second in line.
Kate's dress is the Bullet Dress by Malene Birger, now sold out at Selfridge's. Pretty if not a stand out. Where is some Christopher Kane neon when you need it?! The Birger dress is made of silk mix linen and features a green banded waist, perfect for reminding us just how tiny Kate's waist really is. The strong shoulders, pleating on the skirt and the high, round neckline also suit the Duchess' frame.
Accessories: L.K. Bennett Sledge2 nude pumps, mystery nude clutch
(please, someone help us out with this one!) and Kiki Mcdonough citrine drops.
Photos: REUTERS/Phil Noble via Yahoo! Canada
Kate's face is priceless in the pic above.
Maybe she's not used to seeing Wills' miss?
Photo: celebrity-gossip.net
Later on Kate got set for some wildnerness activites including a canoe ride (the royals actually seem to like this kind of stuff--yeah, we don't really get it either). Back on the scene were the J Brand jeans and Sebago boat shoes from yesterday, paired with a snap-button shirt and an interesting belt.
Kate's button-down is the Burberry London Military Pocket Jersey Shirt.
Kate's belt is by Kenyan designer Linda Camm 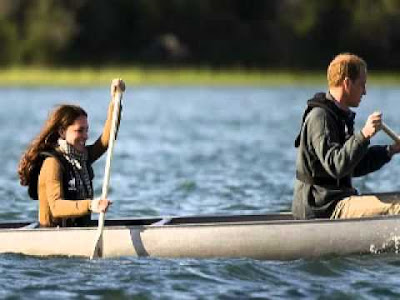 For the canoe ride Kate added a jacket and an Aquascutum check scarf.
William and Kate were gifted a set of diamond-covered bears from Harry Winston. He got cufflinks, she got a brooch, they were made from Canadian diamonds. We're still stuck on the fact that they are freakin' bears. Really? They couldn't have figured out a better design? We're guessing these will be relegated to the vault.
﻿﻿﻿

Then William and Kate were made honorary Rangers, whatever that means. Wills was cute, though, helping Kate put on her red sweater and they're apparently spending the night in the woods getting all romantical.
Posted by All About Kate at 10:51 PM

Oh yay! You have something to say. Comments make our day! xo